The Uncommons is Kelly Serbonich on vocals and percussion, Kevin Moss on guitar, keys, and vocals, and Jay Skezas on guitar, vocals, and violin, Brian Fontana on bass and vocals, and Jeff Goodmark on drums. Together, we bring a love of rock and roll and the blues, harmonics, and a whole lotta heart to our collaboration. Listen for our emotionally charged, groovy original songs, as well as a unique collection of covers with an Uncommons flare.

Kelly first found her voice through therapeutic singing as an adult. She brings a raw, honest, and silvery voice to The Uncommons, along with a love of rich and heart-wrenching harmonies. Kelly’s musical interests span from the likes of Dusty Springfield and Carole King to Fleetwood Mac, Extreme, Alanis Morissette, Pink, Lady Gaga, The Beatles, The Civil Wars, Band of Horses, Norah Jones, Cat Stevens, Ray Lamontagne, and of course much more. Her love of singing and music shines through in her performances.

Kevin is a native of rural central New York, he played in several rock and roll groups in the 70s and 80s, including High Noon, Dayz and Crystal Cascade, and progressive rock band, DMK. He has mostly recently been a part of 5 Mile Drive (a previous version of The Uncommons) and Darkwine. His diverse influences include Peter Gabriel, David Gilmour, George Harrison, Eric Clapton, Robert Fripp, Rick Wakeman, Ian Anderson and Michael Hedges. Switching comfortably between keyboards and guitars, Kevin brings versatility and attention to detail, along with a melodious voice that lends itself well to The Uncommons vocal blends.

Jay is well-known and respected in the Ithaca area as a solid and capable lead guitarist, serving as charismatic front man for such acts as Spy Donkey and Do It Again, a popular Steely Dan tribute. A virtuoso on numerous stringed instruments, including mandolin and violin, Skezas plays and sings with passion and engages the audience with his easy-going charm and wit. In his spare time he is an M.D. and family man.

Brian was born in Brooklyn, NY but grew up on Staten Island. He started playing bass at age 17. He is self taught and learned by playing along with his record collection.  Along with his brother Frank, he was a founding member of The Ookies and Penguin Dreams. Both bands wrote and performed original music. He has been in numerous cover bands in Staten Island and now calls Ithaca home.  He prefers to explore music from all genres and strives to learn something new every day. He loves it when the crowd is up and dancing! 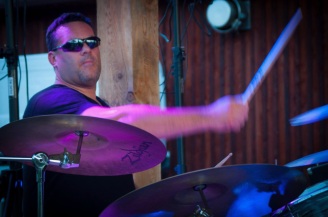 Jeff likes loud things. He also writes songs. He has been playing in bands for 20+ years and loves to jam. Jeff has a verity of influences that include Phish, Led Zeppelin, Grateful Dead, The Beatles, Traffic, and Jimi Hendrix Experience.

Posted by The Uncommons on Sunday, September 3, 2017